Demo of a lesson from Scratch Jr.

Compare and Contrast with Scratch Jr. (for K-2nd) 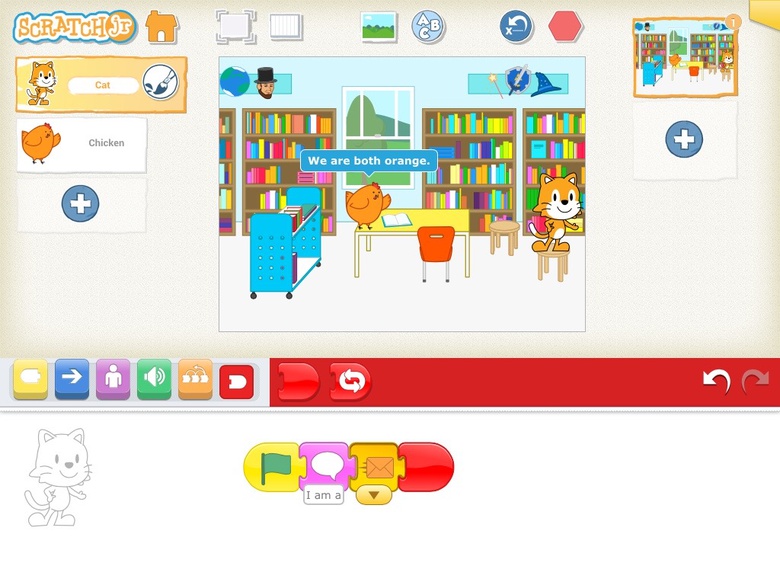 Students will use the Scratch Jr. app to create, compare and contrast characters. This introductory lesson will include the foundational skills students will need to begin using Scratch Jr., so it makes a great "first project" with students.

Pre-requisites
-Have a device available for each student (Note: instructions are written for iPad, but the app is available on Android and ChromeOS devices as well).
-Ensure that the app "Scratch Jr." is installed on all of the devices. This is a free app in the iOS App Store, Google Play Store, or Chrome Web Store.
-Read through this lesson plan. The teacher will be directing students through each step along the way, so familiarize yourself with the end product.

Introduce “Computer Science” - how are computers used in the world around us?
Examples: in cars, washing machines, phones, watches, computers are everywhere!

Define key terms such as debugging, algorithm, code, programming, etc.
Look up the origin story for debugging - and introduce students to the name Gracie Hopper!

Demonstrate coding by giving step-by-step instructions to move the instructor.
This is a fun activity to get the students used to computational thinking - determining the correct steps and the order they need to be in. For this activity, I take an object like my phone or my keys, and I place it a few steps away from me on the floor. Then I ask around the room for students to "program" me to take the steps necessary to reach the keys. If I miss a step and don't reach the goal, then they have to do some "debugging!" It only takes 2 or 3 of these retrievals for it to click for students. Then we head over to the iPads.

At this stage, it is a whole group warm-up. Students will have opportunities to offer their ideas for the definitions of different terms, and hear the Origin Story of the word "debugging." Then, they will get opportunities to suggest the steps needed to direct the teacher to retrieve their item. (See teacher notes).

1) Direct students to their usual desk/table stations for working on the iPads. Students will each need an iPad.

2) Instruct students to look for the "Scratch Jr." app. If you have the ability to project your iPad with a projector, this is very helpful for students who need visual cues. I've also seen teachers use a doc cam to be able to demonstrate the actions needed on the iPad. The intention of all of these tasks is that a teacher is leading the students through each step and demonstrating along the way.

3) Once the App is open, students may see different screens. The first screen may ask if they are at "home" or at "school" - they should select the red apple icon and indicate that they are at "school." The default launch screen after this selection includes an icon with a little house. Tap on the house icon. This is the Home Screen.

4) Here is a screen shot of what the Home Screen looks like. This is where your students will start a new project by tapping the plus icon. Have everyone start a new project, even if existing projects are available on the device.

The end goal of this step is to open the iPad App "Scratch Jr.", and start a new project.

Show kids the left, top, and side areas of their screen. This is where students can Add Characters (left), Change the Background (top) and Add Scenes (left).

Now that you have started a project, you'll notice we just have an orange cat and a plain white background. To start with today, we're going to change the characters. After we do that, we will change the background.

1) Start by deleting the cat character. To do this, take one finger and place it on the character. Place and hold your finger until a Red X shows up. Remove your finger and then tap the Red X. Whoosh! He's gone!

2) Now tap the Plus Button on the LEFT SIDE. This is where we will add new characters. Scroll through the Characters and add them to your program. To add the character, tap them twice. You may also tap them once, and then select the check mark icon in the upper right hand corner.

3) Add an additional character. For today's lesson, your two characters must be different. Do not add two of the same character.

Note: if you don't like the characters you've picked, you can delete them the same way that we got rid of the Orange Cat in Step 1!

Direct students to the small picture icon that's located at the top-center part of the screen. This is where they can access the Background Gallery and choose a Background to use for this lesson.

Now we will change the background.

1) The Background Gallery is found by tapping the little picture icon that is at the top-center part of your screen. It looks like a little painting with grass and a blue sky.

Beginning to Program the Characters

The code blocks we will be using can be found in the Yellow, Fuscia (pink) and Red toolboxes.

The objective of their programming will be to get each character to "say" something that is either the SAME or DIFFERENT than the other character.

Let's get coding! Today's objective will be for our two characters to talk to each other about what things that are either the SAME or DIFFERENT between them. For instance, if you have the Orange Cat and the Orange Chicken - they are the SAME (orange), but the are also DIFFERENT (one is a chicken, one is a cat!).

Look at your screen. Towards the bottom of your screen there are several different toolboxes, each one a different color. Each toolbox has different types of code blocks in them. These blocks are like puzzle pieces with directions on them. When we snap these puzzle pieces together in a row, it gives our character instructions on what to do.

Take a look at the YELLOW TOOLBOX. We're looking for a code block that will tell our first character to start. GREEN FLAG! That's right. Put your finger on the GREEN FLAG code block and drag it down into the white space below. You've started coding!

Today's objective is to get these characters talking. We're going to use word bubbles to show our character's words. Tap on the PINK toolbox and find the Code Block with a WORD BUBBLE. Word Bubbles are like the way they show words in comic books.

Put your finger on the pink WORD BUBBLE code block, and drag it down into the white space below. Drag it right next to the GREEN FLAG code block and let go. They should POP! together. We are building a little code train!

The last thing we need to do for our first character is change the words that they are saying.

See if you can figure out how to change the words that are shown in our pink WORD BUBBLE block.

To change the words - tap on the little word "Hi" in the WORD BUBBLE block. When you do this, what happens? A little keyboard shows up on your screen! Use the keyboard to change the message. Remember, we're having our characters say something that is either the SAME or DIFFERENT than the other character.

In this step, students will add the code for the second character.

Now we are ready to add code to our second character. The first thing you'll need to do is switch to the other character. You can do this by tapping on the character. You'll know which character you are programming, because their icon shows up in the workspace in the lower lefthand corner.

To begin coding our second character, we're going to start by receiving a SECRET MESSAGE! This means that the second character will not start his code program until the first character sends the message.

The RECEIVE MESSAGE code block can be found in the YELLOW TOOLBOX. It's the one with the open envelope. It's very important that you use the same colored envelope, to send and receive the message, otherwise the second character will not know when to start talking.

Next add in a WORD BUBBLE code block from the PINK TOOLBOX. Change the text of the word bubble so that the second character also says something that is the SAME or DIFFERENT than the first character.

Here are some ideas about things that can be the SAME or DIFFERENT between characters:

Next, to end the code train for the second character, we're going to go to the RED TOOLBOX. We're looking for the code block that is just PLAIN RED. Drag that block on to the end of your code train.

We're all set! To play your code, go to the GREEN FLAG in the upper righthand corner and tap it once. It should begin by playing the code for the first character.

Remix published on Nov 24, 2021 by Anthony Gervase: Compare and Contrast with Scratch Jr. (for K-2nd)